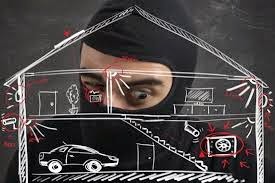 My husband bought an in-home security camera which he set up in our living room and leaves on round the clock. His friend installed one in his home, and suddenly my better half thinks it's imperative that we have this extra layer of security. When I am in the living room, I put a throw pillow in front of it because I have no desire to be filmed. He assured me that it's totally secure with footage being saved on The Cloud.  Ha...no problems there.

We have some fundamentally different ideas of how this should work. My idea is that we should turn it on when we are gone in case someone breaks in. His thought is that someone could walk into the house when I go to the mailbox...which takes about a minute. He thinks I'm unreasonable not wanting to be filmed, and I think he's pushing some boundaries expecting me to comfortable with my every move captured.

The promo on the website says it's good for security and also lots of fun to share footage with friends. Seriously??? Let's face it...we're not the Kardashians, although I can't fathom why anyone finds their lives all that interesting.

One thing the website and the limited instructions that came with the packaging doesn't readily explain is how to turn the darn thing off. So until I can find that off switch, the throw pillow is what's keeping my personal moments secret.