Thomas Edison Was A Spider 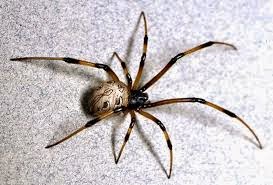 Success is not final, failure is not fatal.  It is the courage to continue that counts.              ~Winston Churchill

We have a Florida room in our home which is wonderful when we have company.  It's spacious and filled with windows.  Unfortunately, it's also filled with spiders.  While I have been known to escort insects out of the house alive and unharmed, spiders suffer a different fate at my hands...they are
squashed.  I think it's because of my constant battle with them...they sometimes infuriate me.

But, they have taught me something about persistence.  You see, when I dust away the spider webs built in the corners of the windows (and there are many windows and webs), the very next day, the webs are back.  And when I dust them away again, voila...the following day, more webs.  Spiders are persistent.  It's not in their nature to give up.

Thomas Edison was a spider.  His inventions took hundreds or maybe thousands of attempts before he got it right.  Yet he never gave up.  He looked at each failed attempt as a gift because he knew one more method that wouldn't work.  It was a process of elimination.  Colonel Sanders never gave up on his chicken recipe.  Jack Canfield never gave up trying to get his Chicken Soup For The Soul book published.  There are countless examples where persistence led to lucrative results.

When you suffer a setback, are you like a spider? Do you start again? When your plans fall apart, do you make a new plan? Or do you throw up your hands and tell yourself that it's no use and return to the safety of what you have always done. You know, they say if you do what you've always done, you'll get what you've always gotten. To expect something different is the definition of insanity.

The next time something doesn't work for you, I urge you to think of the spider and try again.  You may be surprised to find that persistence pays off.

When you feel that you have failed at something, shift your paradigm.  Instead of "failure" reframe it as an unexpected result.  I think this is how "Post it Notes" came into being.

Take your "unexpected result" and examine it.  Turn it over and over in your mind.  There is much to learn from situations that didn't go exactly as you planned.

And, in the words of Winston Churchill, "Never, never, never give up".