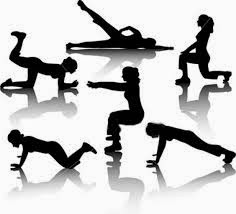 Exercise creates a "happy" chemical cocktail in your brain.

A great way to stay smiling.

This is about exercise, but please don’t stop reading yet. Exercise is the activity we find most difficult to integrate into our lives,  so I’m sure many of you will just dismiss this information with a “That’s nice,  but I
don’t have time” attitude.  Before you do that, please read on.

Weight problems have plagued me my entire life. I was the chubby 6th grader who was never chosen for any team in gym class – the last team to choose had to take me. I went through high school envying the girls who had boyfriends – because I never did. I was teased constantly because I was fat – judged on my appearance and nothing else. What made it even worse for me was that I was the fat sister to 3 skinny brothers who ate as much as they wanted and never gained an ounce. It just wasn’t fair.

To shorten a long story, at 18 I discovered boys, went on a starvation diet, and transformed my body. For the next 22 years, I tried many fad diets, and my daily caloric intake rarely exceeded 1200 calories (except on the days I gorged myself on my favorite downfall – ice cream).

The one thing that I never incorporated into my weight loss plan was exercise. In fact, I used to proudly proclaim that “I’d rather starve myself than exercise!”

At 40, after taking stock of my life, I decided that health mattered, so I quit smoking, promptly gaining 13 pounds.  Because food tasted so good to me now and I wanted to eat, I realized that I had to exercise. Reluctantly I bought a stationery bike and began to ride.

Imagine my surprise when I started to look forward to exercising.  It invigorated me. I felt renewed. My mind was clear, and I had more energy than ever. Then I traded the stationary bike for running. There was nothing as wonderful to me as lacing up my running shoes for an early morning run.  Witnessing the miracle of the sunrise was a huge benefit of being out in the a.m.

What I became aware of was, not only did exercise enable me to keep my weight in check -- my whole life was happier. I felt better, had more energy, and was able to deal with stress.

So I was really excited about a study from researchers at Duke University which confirms that regular exercise can change the way we feel. When we exercise, our brains release endorphins
(or “brain candy” as I call them) that radiate a sense of satisfaction and well-being. People who exercise regularly actually get more pleasure and satisfaction out of the little things in life. And, the good news is – you don’t have to exercise a lot to get these benefits – you just have to exercise regularly. Your spirits will begin to lift with only 20 minutes of exercise 3 times a week. And it’s the duration of the exercise, not the intensity, that seems to be the key factor. So you don’t have to melt down into a tired pool of sweat at the gym to reap the benefits.

So people, make some brain candy. Raise your spirits with exercise. Join a gym and meet some new friends.  Grab a partner and go for a walk. Take a yoga or pilates class. Go rollerblading, play volleyball, take dance lessons. The possibilities are endless.

By the way, did I mention the Duke study was done with people suffering from clinical depression. One group did 30 minutes of brisk walking 3 times a week, the second group took the antidepressant Zoloft, and the third group did both. The results showed all 3 groups did equally well, and the medication offered no particular advantage over the exercise. So, if exercise can raise the spirits of depressed people, imagine what it can do for you. (Note: if you are taking anti-depressants, I am not advocating that you stop without checking first with your doctor.)